I know at some point we, as a nation, will move on and forget.  I was presented evidence of that today as my work tried to have everyone dress in Red White and Blue, and then served up a cake.  I'm not really certain they appreciated the optics of that.  When I left work I went to the beach to run, because I really needed to clear my head.  Judging from the amount of people dashing in and out of the water, the children at play and the ungodly amounts of weed I smelled, most Americans have moved on.

But, I haven't.  I'm not going to whip myself into a frenzy or sit in a corner and cry.  I'm not going to try to be the one forcing other people to be respectful.  I can only say for my own part, 9/11 is always emotional.  The visions of people falling to their doom on live TV.  The horror of watching UA 175 barrel into its target.  The smoking crater in Shanksville PA.  The Pentagon facade collapsing. These are images that I can not get out of my head no matter how hard I try.

Was the Global War on Terror that followed justified?  Yes.  Was it well prosecuted?  No.  There are a lot of assumptions that have been made about Iraq and Afghanistan by media types and the public at large that are either wrong or are just plain silly.  I've seen why you shouldn't just use nukes.  There are good people worth saving.  I've also seen why you don't pull back and let the situation fester and hope a few drone strikes will win the day.

I've seen people tortured.  I've seen decapitated bodies.  I've seen good boys become old men shockingly fast.  I've seen those same men turned to so much hamburger meat in the blink of an eye. There is evil in the world and September 11th is a strong reminder of what happens when you are not paying attention to that evil.

I don't want you to feel shamed into showing faux displays of remorse or patriotism.  If you genuinely feel that,  then I want you to express that.  I really don't care if you wear ribbons, special shoes, force yourself to watch United 93.  I want you to genuinely honor the best qualities of our people that were on display that day.  When you feel overwhelmed, think of the firefighters who prepared to climb 70-90 floors to fight a raging inferno.  When you feel like you've been defeated remember the passengers of UA 93 who refused to go down without a fight.  When you feel like all is lost, remember the FDNY, PAPD, NYPD and EMS, who, imediatly after losing so many of their brethren immediately turned around and did all they could to try to rescue anyone that may have been left behind.

Most of all, I want you to remember this one thing.  This is America.  We have seen hard times before.  We are amazingly resilient.  When we look to each other, when we trust in our own abilities as a people there is no calamity we can not weather.  Things may seem bleak now, but all you need to do is light a candle, and light a candle of the person next to you and suddenly the world isn't so dark anymore. 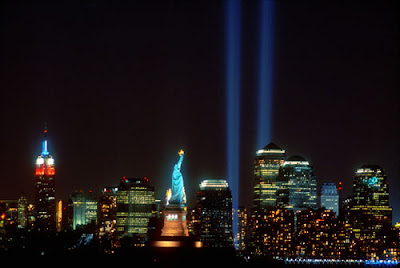