You all know the name of the game. Twice a year we get together as a family and give thanks. It's funny how Thanksgiving seems to be the warm up for Christmas, but lets face it one holiday to remind you not to be a stick in the mud doesn't seem to be enough. So all throughout America people are getting together in a celebration that very few people truly understand. We gather around a table bicker and banter while eating foods that are traditional (Turkey, Yams, Corn Bread, cranberry jello or whatever it is, and a bunch of stuffing that just came from the trukey's asshole).

When all is said and done, there are lost of stories to be told on thanksgiving. Many are of joy, some are of terror, and some involve large amounts of stomach discomfort, and peptobismal. What is not told is that the Pilgrams, were near death on plymoth Rock. Starving, and hundreds of miles north of where they were supposed to land (Virginia, Ironically named for the "Virgin" Queen, Elizabeth who was rumored to be anything but) Until the natives taught them how yo live off the land.

Strange as it may sound in this day in age, it was faith, and perhaps faith alone, that kept the Pilgrams from completly devolving into a mass of paniced individuals, that would ultimatly have perished due to inability to function. But anyone who has lived through a massachusets winter will tell you it's no small feat. We forget that this feast was all about getting together and being thankful for what you have and not bitching about what is wrong with your life. So take time, over eating turkey and such to remember what it's all about

To dater there have been NO veterans of Korea or Vietnam elected to the White House. We've had Generals, Colonels, Commanders, hell even Lieutenants elected president, from almost every period of service, except for the past 60 years or so. We've had Truman from WWI, Eisenhower, to Ford were all WWII vets, As were Regan and Bush Sr. What does that leave us? A group of elder statesmen left over from the last "respectable" war America has fought?

The problem with Army and Marine Veterans of Korea, is that they are caught in that stage between WWII and Vietnam. We start to see one kind of battle fought with weapons both new and old, but in look, and feel it had far too much in common with WWI and WWII to be taken seriously. John Glen was perhaps one of the most respected statesmen from this period, and as far I know he never had aspirations of becoming president.

And then there's Vietnam. Veterans of this era, are perhaps as sharply divided as the country was. You have some that turned their back on their service and those that served (John Kerry) and you have those that continued to bare true faith and alleged to the causes they enlisted for. Even till today the country does not have enough distance from that painful time to really judge the events and a clear context. In recent years, people have taken a closer look at this war, and they can start to see the victories as well as the defeats. They can begin to honor the courage involved, and in this small way the betrayals of the public are lessened.

But, sadly I think that John McCain was the last Veteran of this era to run for the highest office of the land. Many Vietnam vets have their own demons to face, and many would not want to get involved in the demons of others. Especially since some of the demons we face today are directly resulting from that terrible period in time. So where does that leave us?

Well the traditional model of a president is an elder statesman, learned and wise, with experience in a broad range of subjects. While youth can indeed be a factor, the truth is that Experience in statecraft is indeed hard won. With the new President-Elect, we are left with an unknown. He has the capacity to become either a great President, or the worst disaster this country has suffered in a long time. We have a man that could be more divisive than Nixon, and less inclined to use Force than Clinton. Leading us to a wide chasm of bleak possibilities.

While it might be simple personal bias, I believe that a veteran, of any war is far more qualified than most civilians regardless of experience. When it comes to crisis management, stress of the job, and the ability to make, and stick with hard descisions, you would be hard pressed to find someone more qualified than a soldier, of any branch.
Posted by The Mad Medic at 01:45 No comments:

I hope all is well In Myr world. I can't really tell because she turned her blog to private so good luck, so long and thanks for all the fish
Posted by The Mad Medic at 18:33 No comments: 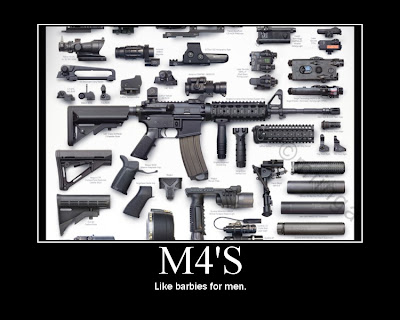 Seriously. With so many options who could ask for anything more? It will feel so good to have my old friend in my hands again. Like the touch of a woman the M-4 is something you just don't forget.
Posted by The Mad Medic at 01:50 No comments:

Now ask me if I care

It is an unstated fact that Military minds hate a mess. It is also a fact that when packing up in a depressed state of mind things are never orderly or clean. So today I slept in. Why? because I wanted above all things to catch up on sleep that I have sorely missed the last couple of days. When what should happen? A walk through. I mean there is little I like less then an officer comming through my room nitpicking about the way I live, or probably more accuretly survive.

right away I had questions about my health, mental and otherwise, if I'm using drugs for my knee,and my financial situation. I got a dressing down from both the Lt and the CO. So here's my thoughts on that. STAY THE F**K OUT OF MY ROOM!!! I know that it may technically belong to the army, but I am given little space, and what little space I do have is MINE! I damm well better hoard personal space like most people hoard gold.

What truly bothers me is that the CO is sitting there judging me and he's a chemical corps. officer. The LT has never deployed and for the most part, as far as I can tell is just eye candy. So why, pray tell should I get bent out of shape if they come in here and judge me. I realize i have too much shit, and in a perfect world I'd love help to go through and get rid of what I don't need. But the absolute LAST thing I need is for a bunch of POG officers judging me.

I don't honestly know what makes me angrier. The acusation that I'm using drugs, or the attempted dressing down the LT tried to give me. I spent the rest of the day packing/cleaning, and you know what, the dam place is STILL a mess. Now go ahead and ask me if I care.

Truth is that for over a year I have been devoid of purpose or use. I have had almost no social life, and I have no idea how to interact with non soldiers anymore. And here I sit, a rolley polly, having gained perhaps 50 pounds since I got here, majorly depressed, having a hard time with, well everything, asking myself "how can I do this?" I honestly don't know. Even a talk with SSG Mathison didn't really help. All the old issues are still there just beneith the surface, and all the emotions that go with them. How can I honestly go up to 4th brigade, and get ready to deploy, when I can barely keep it together when I'm not doing anything?

In a Weird Place.

Among other things in the past week I've had a sleep study, and an MRI on my L knee. It was kind of a pain in the ass. There are a lot of people that have been working together to figure out just whats wrong with me. Well apparently there are a lot of people that know something based on the results but what that all means no one thus far has told me. Medically speaking I think I'm going to be ok. BUT that doesn't mean I'm entirely ready to go back to duty. But what can you expect.

Last night I went to Chuck White's (Second) wedding. I will be fair, and say it was a good ceremony, however there wasn't that many people there, and Chuck's uniform was a bit off. Aside from the unit awards, his MEDCOM patch was crooked. During the ceremony he was crying, something which was a bit odd. Not a tear at Harelson's funeral, but her he was practically balling. I'm not going to dog him too much. Unfortunately, something went wrong with my camera, and I couldn't take any pictures. Afterwards I went to the reception. I'll be honest, Herman's wedding was a little more impressive. But I had a fair amount of fun.

I mad the tough decision to try to mend a fence with Jessi. It didn't go well. She cried. A lot! I don't understand how I always end up feeling like the bastard. Anyway Here I sit awaiting on orders, personal life, or lack there of in Shambles. But what the hell could be worse right?
Posted by The Mad Medic at 15:40 No comments: