Glad to see it (FINALLY)

Ok so this post will require a bit of Background.  First.  12 July 2007, if you haven't seen the video, then here's the short version:  A couple of insurgents were getting ready to jump Mortar Platoon 2-16 Infantry regiment who were sitting in a blocking position supporting Bravo Company.  They were spotted by two Apaches from 1-227 Aviation Regiment.  What followed were three distinct engagements.  The first, was pretty obvious, and in the process a Ruiters photographer was killed.  Following that there was a van that pulled up that started loading the wounded.  This was engaged as well.  Lastly there were a bunch of Military Age Males with full on combat rigs (this particular part is almost completely ignored) they went into a building then got fired up by hellfire missiles. Here's the Video that shitstain Manning released (not I put out the unedited video, because the edited one is utter horse shit)


ok so on the face of it there's a lot to talk about here.  Is it disturbing?  Yes, a vehicle appears to drive over a body (you really can't see in a humvee), the children were pretty bad, it was shocking, and you can hear Bushmaster 6 immediately get on the radio and begin evac.  Then you also see a lot of other activity.  There's a lot of things I could say (because I was there).


I'm going to be honest after the video was released and blasted on the news I had some SERIOUS issues.  Shortly afterwards I called McCord and said something to the essence of "can you believe this shit?"  well he said don't worry about it.  I thought that was the end of it.  He went ant talked to the media and I got a little worried.  A little while later ADM Mike Mullen came to WVU and I confronted him about the video and asked how they would protect us from this slander.  He actually gave me a coin after that (never have to pay at a dining in AGAIN!!!) well that got my name out to reporters.

I got contacted three times about the incident.  One of the people that contacted me was James Spione, who was creating a video called Incident in New Baghdad.  Well I had my doubts on the whole thing, he didn't have money to come to me and I didn't have money to go to him.  I genuinely believe it was a scheduling issue, not anything untoward.  Well that leads to this video.


Yeah guess what.  It's nominated for an academy award.  That's pretty eye opening.  I take some serious issue with McCord talking about Craig, who was my guy, and not in his platoon.  He was nowhere near Craig when he died, and if you've read my post "my side" you'll understand that I took his death pretty hard.  Then this shit happened.  5 days later, Harrelson died.  So i tend to over react when this particular time period is talked about.

Well apparently the Nomination has spurred some of my former comrades into action.  I tried *desperately* to get them involved when Spione was actually making the documentary, but no one thought anything of it.  Right now it's just a Facebook group 2-16 Veterans Against Liars (i.e. Ethan McCord).


I think that it's too little too late, but I shot this off to as many people as I know.  Now its a bit of a waiting game to see if anything happens.


Also here is my account for you.  If its a bit odd I had to use Paint to cut it down some.  I'm not going to rewrite the whole thing so just take a look here. 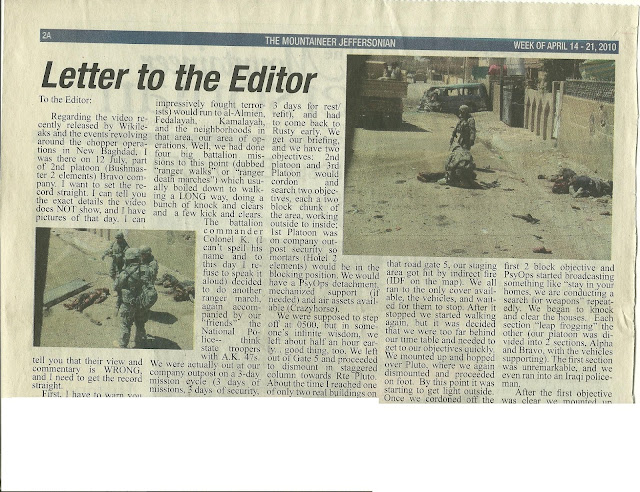 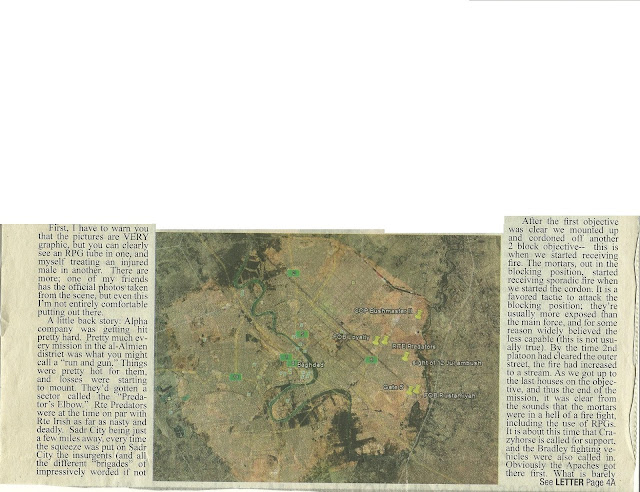 You just got the Liebster (not Bieber) Award.