Sgt T has a Sh*tty Day

2nd Battalion 16th Infantry Regiment "Rangers" (no not those Rangers), part of 4th Infantry Brigade Combat Team (Dragons), 1st Infantry Division (the Big Red One) was in a strange position in 2007.   4th Brigade was something of a test bed, to see how fast a light brigade could stand up if needed, but it was the only light brigade of a heavy division.  While the rest of the division would train with thanks and APCs 4th IBCT would. . . walk. . . a lot.  It often felt like no one was quite sure what to do with the brigade, still when the Surge happened, we were "ready" to go, so 4th IBCT was the second "Surge" unit in.

2/16 had a CO that had been regimental XO of the Rangers (yes those Rangers), and had a bit of controversy surrounding him.  Despite that, or because of that, he was determined to be the best damn battalion in the brigade, and trained hard.  I, as part of 2nd Platoon "Loose Cannons" Bravo company "Bushmasters" came in almost as the unit was deploying so I didn't have to hear about the massive amount of ruck marches, or the many Marathon runs through tank trails, or really any of that.  All I got was the deployment, so when the first "Ranger Walk" came down, it was something of a shock to me.

"You want me to do a 12 mile tactical dismounted march into the middle of New Baghdad with just two vehicles to cover us if we have to do the Bugout Boogie?  ARE YOU NUCKING FUTS?!?!?!"

My trepidation about the whole thing got even worse, when the S-2 (intelligence) briefing came.  Areas in yellow are possible IED areas, watch out for trash, as it hides IEDs and the areas in red are possible sniper locations. . . well by the time he was done the entire route was a mish-mash of yellow and red.  Which lead to the moment I'm sure everyone had that went something like "oh fuck, we are all going to die."

Strangely enough the Ranger Walk (actually Operation Ranger Dominance) went off without a hitch.  I was amazed at how well it went, and perhaps because I wasn't carrying my heavy ass Aid Bag, I wasn't too much the worse for wear when we got back.  In fact there were no casualties at all aside from the odd heat casualty, but they were made right as rain by a few IV's.  So when it came time for Ranger Walk Part 2 I wasn't too scared or upset, I just kind of rolled my eyes.  Crap you want to do this again? This time however there would be specific targets and we would have Iraqi Army support.

We would also be targeting certain homes along this trip, and would be looking for bad guys.  Two companies would go out and walk, doing what they were going to do and two companies would be on hand to provide support.  It was one of those missions you knew was going to be long and suck hard.  But at oh-dark thirty (NOT zero-dark-thirty), with NODs on, off the Bushmasters went a walking from our new COP and out into the wilds of Iraq.

The Walk started off pretty slow, a staggered column of 2 of Bravos platoons walking into Fedellayah, a stronghold of Muqtada al-Sadr.  When the dawn broke we all took a knee,back to back, and took our NODs off.  I stored mine in a canteen pouch on my back so I had to have help getting them put away.

The mission was probably an hour and a half old, and we were stopped. I mean we stopped and waited.  Now in a mission like this sitting still is not a good thing.  We weren't in Fedallayah proper yet, but we were pretty close, ready to get into this small slice of the cesspool.  For some reason all the vehicles were stopped at a T intersection, and seeing as I was at the tail end of the company at that point and without a radio at that point, had no idea what the hell is going on at this point.  Well the sun is up, it's still early (and I'm still groggy) I'm sure that we have something important to do here.

Well it was time to get going again.  Ok well this is going well.  We stop again.  Ok well they know we're coming now seeing as people are starting to stir.  I'm not in the command loop, so at this point I know as much as the next Private (or Specialist in my case).  Finally I see our Iraqi Army support, and man what a bunch of Yahoos.  They weren't even really pointing their Dishka (Technically DShK) in the right direction  (see outward) they were actually pointing it down the street that out vehicles had turned down. 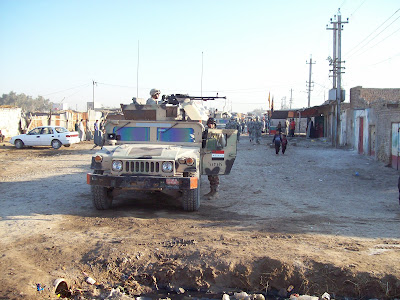 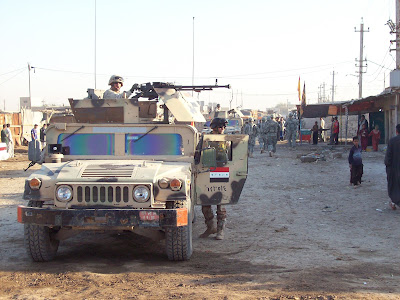 It seemed like there was a trafic Jam.  For some reason our vehicles weren't moving.  There seemed to be a real big pow-wow, trying to figure out what was going on.  What amazed me is the IA even had new vehicles we didn't even have (but soon would have) they had the new MRAPs.  Well I guess the new guys need every advantage they can get.  Doesn't seem to help that they don't really have a clue whats going on.


Well it can't be too serious or they would have called me right.  As I passed my de facto squad leader SSG Gutierrez I asked what was going on, if someone was hurt or something like that.

"Don't worry about it Doc" he told me.

Then I turned the corner and saw it.  and OH.  MY.  GOD!  I bust out laughing, despite the fact that we were still in the middle of a serious mission.  Why?  well see for yourself.


One of our humvees fell into a very deep and very nasty shit trench.  To be a little more PC I suppose I could call it an open sewage trench.  The worst part is that was my vehicle.  I had some elbow pads and extra mags on the TC side dismount seat.  I couldn't help it, I still laughed, and I couldn't stop laughing.  Worse for the poor souls inside, the Gunner, the Driver and the TC, the truck in front of them trying to haul them out had actually gotten them more stuck.  and while the Humvee is supposed to be water proof, SGT T can attest to the fact that they most certainly are not.

Now I got the story from both "Fish" (the driver) and SGT T later on.  Apparently Fish was following the truck in front and had gone a little wide to avoid a bongo truck.  SGT T had apparently seen the danger on his side too late and had started screaming that he had better cut the wheel to the left quick just as the truck which is quite heavy, slid into the long slit trench of foulness.  You can imagine a lot of screaming and cussing going on as the sewage seeped into SGT T's seat.  Fish actually was laughing about it which did not help SGT T's mood.  Neither did it help that he had already been feeling sick that day (but did anyone tell me?  NOOO)

Eventually it was figured out that pulling it forward wasn't going to work, they had to pull it back the way it came.  it took almost a half hour to get the damn thing out of that foul pit, and the crowd of locals that had gathered actually cheered laughing when we did.  I guess everyone cheers for guys in a shitty situation. 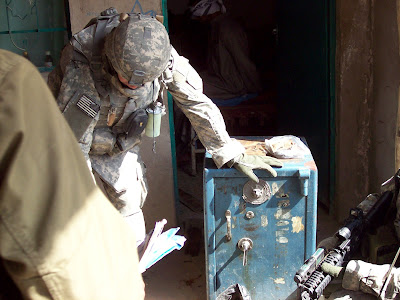 to being asked to search the areas that a bunch of surly cows were occupying giving me the stink eye. 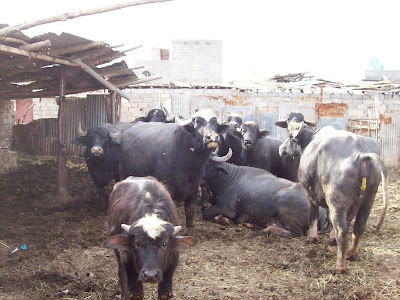 by the time we were around the corner from our COP I had seen enough shit to last me a life time.  I mean we're talking some heavy shit here.  I think I'm going to have to have a talk with some Vietnam Veterans, because I have to tell you "Getting in the shit" must've sucked as much for them as it did for me.  We didn't get back to "friendly" areas for a long time, but when we did we were all tired. 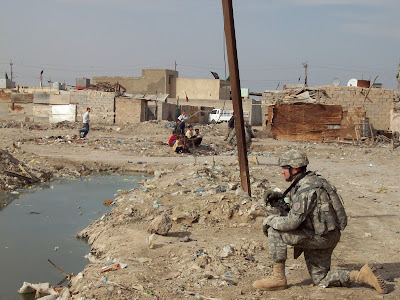 It was at this point that SGT T actually started to puke his guts out.  It was getting to the point that he couldn't even hold water down.  I was brought up to see if he was alright but seeing as we were less than 300 meters from out COP it was decided he could wait.  He wasn't really in a position to argue.  So we might've walked a little faster to get back, and get him looked at.  As soon as he got his shit (IBA K-pot etc, but after the day I wonder why we call it that)  off I was on him like a fly on stink.  Well he was tachycardic and his BP was low so he was obviously dehydrated.  Time for an IV.  Well here comes my Platoon Sergeant who loves giving IV's. 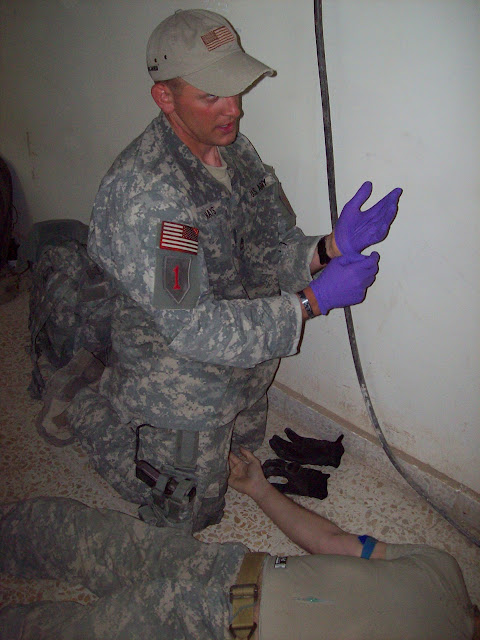 SGT T gets to be a pincushion subject for our PSG.  We hadn't even gotten the sweat off our uniforms and and there was SFC Mays jumping into give an IV.  There's a reason Medics call CLS (Combat Life Saver) people "Combat Life Takers".  There's something truly scary about an infantryman coming to give someone an IV.  Even more terrifying if they are excited about doing it! Well SGT T could say officially he had had a truly shitty day, and I can say that until the day I die I will have a reason to laugh.
Posted by The Mad Medic at 00:12

I got to the BDE when it was still flagged as 6/25th, and everybody's command element was in the BDE HQ building. From my perspective, count yourself lucky that you missed the growing pains.