On Behalf of a Grateful Nation.

Three men got up and gave speeches about him, they talked about how they knew him, and what he had meant to them.  No one mentioned how he died.  No one mentioned how little was left of him when the recovery team got to him.  Some words were said about his sense of humor and I tried not to cry thinking about the trouble he got in just a few short days before he died when his Zune went missing and he thought someone stole it.  Turns out it was in his laundry.  The Zune and that laundry were ashes now.

Once he had tossed me like a rag doll when we were wrestling around.  When I helped carry his remains he didn't weigh much more than the litter.  There would be no uniform to put on his body at Dover.  There was no body, just a few bones.  That thought bothered me more than anything.  Would the images that go through the family's mind somehow match what happened.

As we sat in the chapel and I looked at the display, the picture propped against a clean set of boots, a rifle upturned with a K-pot on top, a set of fresh, clean dog tags hanging from the pistol grip, with the battalion flags on display in the background, Bravo company's guide-on right directly behind the display.  All that he was or did, now an empty set of boots, and empty helmet, and a clean weapon that wasn't even his own.

In a weird way the fact that all of these items were so clean just seemed wrong.  There ought to be blood, dirt, oil, or sewage on those boots.  The helmet should be covered in sweat stains, and the rifle should have dust all over it.  This sanitation of the life of this gentle hero, seemed to add to the unreality of it all for me.  Not him.  He had so much to live for.  War can be cruel and random, but it is not until it takes someone that you are truly friends with that you realize just how cruel it can be.

I didn't see him die.  Didn't try to save him.  Couldn't.  Now there was a small pitiful pile of charred bones heading back to America, that is all that remains of one of the best human beings I have ever met.  The Air Conditioning kept the chapel at room temperature, robbing it of the misery you should feel for the middle of the day in the middle of July in Iraq.  The FOBbits that turned out to fill the pews, didn't know him, but they came anyway, all of it adding to the surreality of the scene.  It wasn't until my friend, and fellow Medic PFC White was done speaking that reality was starting to sink in.

And then they called roll.

A deafening silence fills the chapel

For a second there was silence.

Bang. I jump a little

Bang. I grab my legs and ball my fists

Bang. I know what's coming next.

And then the most horribly haunting notes any soldier has ever devised slowly slipped out of a bugle.  Even the pace was sad.  Loss.  Regret.  Young men never to grow old.  Taps says all these things in less than thirty seconds.  It speaks somehow to the very deep scars and broken hearts that every battlefield loss causes in their comrades.  A lament.  Would but I could trade places with you.

Fat tears spilled out of my eyes and I began to tremble with the effort to maintain my composure.  There is a lump in my throat that threatens to choke me completely, and even taking a simple breath is difficult over the utter despair I feel.

Once the Bugler is done, the chain of command gets up one by one and slowly salutes.  Our parent brigade commander Col Gibbs was there, as were the battalion commanders of every battalion on Rustamayah.   they would stand in front of the display make a slow salute, then the higher ups would leave a coin, then they would leave.

When it finally got to our platoon's turn we got up four at a time.  Each man would leave something.  A dog tag, a CIB, a namtape.  I had a CMB with a dog tag.  When it came to be my turn the three I was with marched up, as if practiced, then in unison all saluted, held it for a heart beat, then dropped it.  one by one we reached into our pockets and deliver the items.  Some grab the dog tags and close their eyes and say a silent prayer, say good bye, then they step back in line.  When it was my turn, third in line, I came forward reached into my right pocket and deposited my token, then reluctantly Grabbed his dog tags, and held them in my hand.

"forgive me" i whispered so low no one could hear it.

When everyone in my row finished their moment with the monument, we walked down the right side fo the church, where our Battalion Commander LTC Kauzralich, our Command Sergeant Major, CSM McCoy, the Company Commander, the First Sergeant, the Platoon Leader, and the Platoon Sergeant were all in line.  We went down the line hugging each man, and some would say a few words of encouragement to the men who looked like they needed it, really we all looked that way.

I have often wondered about what the family experienced.  I know it is tradition that once the cofin is laid in the ground the flag is removed and folded by the color guard.  The ranking officer of the detachment that conducts the funeral will hand the flag to the loved ones and say "On behalf of the President of the United States, the Secretary of the Army, I would like to present you with this flag in honor of your son's faithful service."

I have often wished, as I see people going about their life, and complaining about mundane things, that people knew how grateful they should be.  I have often wished that they could all have known a gentle hero like Private First Class James Jacob Harrelson. 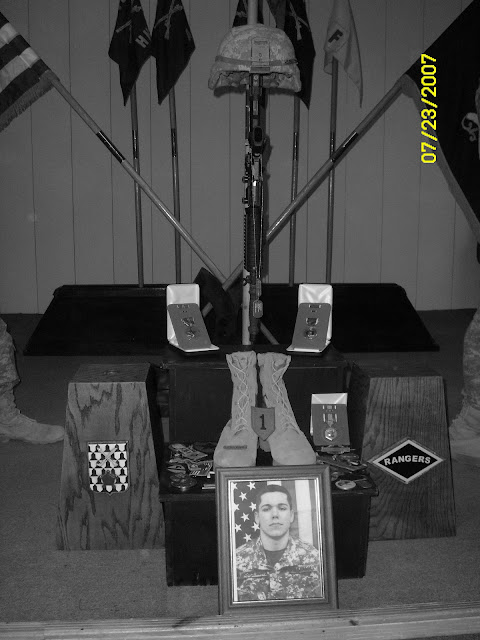