Its not WestERN Virginia. Its this whole other state.

I know I've taken to not posting personal stuff as of late, but this one kinda struck me.  Trying to explain to someone that I was going to Dub V (WVU) and they said "oh is that near Richmond?"  No.  Not even close.  How sad is it that people don't know the only state with two pan handles and looks like an offensive gesture (take right hand make a fist.  Extend middle finger.  Extend thumb.  THAT'S WV  If you still can't find it on a map then maybe you should stop smoking weed) 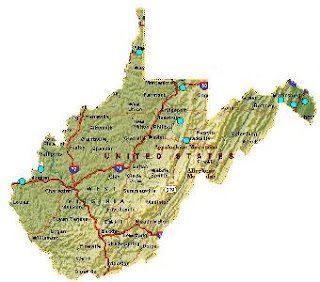 Its not like we didn't just set 6 (count em) BCS Bowl records, by beating the ever loving shit out of Clemson. 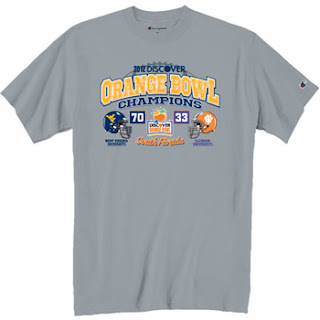 and Apparently it also doesn't matter that we were the only people that even thought that WVU had a chance of beating Clemson, according to ESPN.

So on behalf of every Mountaineer, I propose we push through a bill in the Congress to rename "Virginia" to "East Virginia".  That way there can be no confusion that there is this little odd ball state that loves to burn couches.

yes we love our moonshine.  No there aren't just 15 last name for the million people that live here.  Yes it really is Wild and Wonderful.  anymore questions?

On behalf of every Mountaineer (and even those weirdos out in Huntington the Herd)   I leave you with this classic piece, that you really need 100 friends an a lot of beer to sing properly.

Much easier to read.

I have a buddy that goes to WVU and pretty much said the same thing. People dont know where the hell West Virginia begins and Virginia ends. What's your major over there?

My Daughter was sentenced to two years of AmeriCorps service in West-by-God Virginia. She did here time in Marlinton and in Elkins. I thought initially that I would drive here down to set her up in her abode and then return 2-years later to bring her home (we live in PA) but, after making that lovely drive across the Seneca and Monongahela how could you not fall in love.

We made many trips to visit especially when there were things happening like the Road Kill Cook-off, or Pioneer days. Wow.

They took my Daughter in like family even though she had a full head of teeth and her parents were not even remotely related.

Her time there is done fortunately for us because AmeriCorps pays below minimum wage and she has college loans to pay back (there we were making for her while down in the Wild and Wonderful). But we are planning on heading down for camping and rafting and eating some of that Asphalt cuisine. None finer!!