On May 01/02 2011, USSOCOM sent a unit know as DEVGRU into Abatabad Pakistan for the purposes of capturing or killing Osama Bin Laden.  Despite the fact that everything did not go as planned, the main target OBL was killed.  Moreover his remains were taken back for verification, and it was later confirmed.  He was buried at sea with every attempt to show respect for his remains.

Now compare that to the 3rd of October 1993, after a hard fought battle, whose sole purpose was to capture militia leaders who were literally ripping the country apart.  It turned into an 18 hour long firefight that tested the Rangers of Bravo 3/75 to the limit. 18 US Service-members were killed, some of whose bodies were not recovered till after they were desecrated. 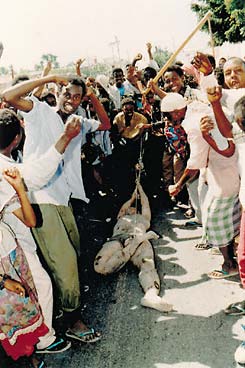 Warfare can be brutal, but without respect you devolve into savagery.  At what point did US Service members do this to any of the Somalis.  Sadly, the aftermath of this incident, and the Clinton Administration's response (or lack thereof) lead to 9/11.  Now it may have seemed like a victory to the Somalis but almost 20 years later Somali is still a shit hole, and is still in the grips of the same chaos that was killing its population at a prodigious rate.

now fast fowrard to 2004.  Fallujah.  We as a nation were trying to show restraint towards a city that was showing all the signs of being in full scale civil war.  We tried to negociate in good faith, and we tried to be the good guys, pulling the Marines off once already.  Then this happened: 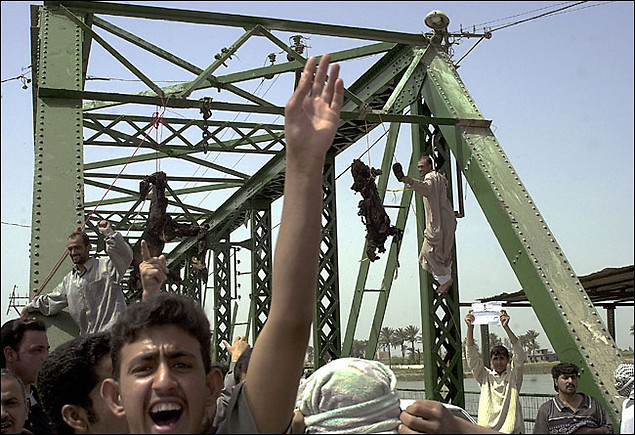 Looks at the faces on both pictures.  All happy and joyous.  Never mind the monstrosity of what is being done behind them.  This was the final straw that launched the Battle of Fallujah.


Now Obama is running around playing up the fact that he killed OBL.  Republicans are criticizing him for politicizing the event.  Hell even Queen Huffington herself said it was wrong.  See I think we ought to go the other way.  We Killed him through a resolve to be relentless and pursue him no matter how long it took.  As the saying goes you can run but you'll only die tired.  OBL in the last years of his life lived a wretched fearful existence, and in the end died like a coward.  That is what we should play up.

I do, however criticize Clinton for having the gall to speak of how gutsy it is.  Gothic Serpent the Embassies in Kenya and Tanzania, Kobar towers and the USS Cole to the contrary show how gutsy he was.  Perhaps though the worst part is Obama saying he killed OBL.  No.  Indeed he delayed taking the decisions as long as he could, and in the end we got him solely through methods that he criticized Bush for.

In the end this is the sole feather that I can see in the Cap of Obama's forign policy.  I think, being an American citizen he ought to play that up as much as humanly possible lest our enemies and adversaries look at all his other abysmal accomplishments.  He should end on this note.  Look at the above piuctures.  Look at how we treated our greatest enemy.  The proof is in the pictures.  WE ARE BETTER than they are.  This is the argument we ought to make to the world.
Posted by The Mad Medic at 23:26

Clinton and Obama are made of the same stuff and sadly too many Americans fail to realize what poor leaders they are. I don't understand how the media can lionize our President for authorizing the mission to terminate Osama as that had been the mission for over 10 years. The men that deserve the credit are the special operators not the buffoon sitting in an operations room taking the credit.