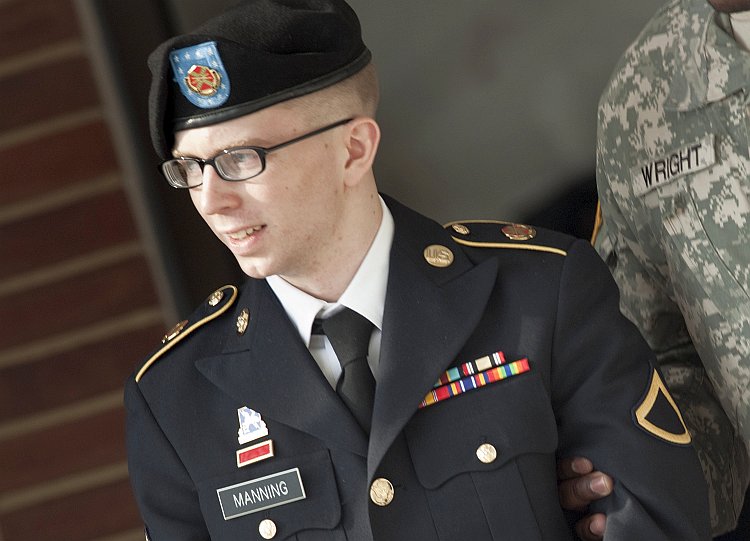 First If you've been in the Army longer than a day you'll notice something.  This retard looks like a Stolen Valor case for the simple face that his ribbons are more ate up than a sammich at Rosie O'Donnell's Place.  The Overseas Service Ribbon should be last, and the National defense medal should be his highest award.  If I didn't know exactly who this was I'd suspect he was a Facebook Ranger.

Having said that, where do I begin?  Well full disclosure, I have a bone to pick with this ass hat.  See in the spring 2010 semester this ass clown thought it would be absolutely hilarious to release a mountain of classified intel to Jillian Assange and his group of narcissistic wannabes that were and are trying their best to be a pain in the ass to everyone.  Wikileaks, showing the restrain of a heroin addict in a poppy field released as much as they could, that would embarrass the United States, starting with a video of a little known incident that happened in the height of the Surge in a really bad neighborhood.  The heavily edited release made the poor Iraqi photographer seem like an innocent victim while he and his buddies were taking pictures.  Then RAT-TAT-TAT-TAT a bunch of Apache pilots ruthlessly gun them down.  Later a van full of children are killed for no apparent reason.  The truth is a bit different.  How the hell would I know, well I was there.  I treated some of those men.  And for three weeks after the release I could not leave my room for fear that I would be picked up and taken to jail as part of a witch hunt.

But who are Wikileaks? They're kind of like TMZ, but much, much worse because instead of trying to ruin one person's life or even a couple of people's they've made it their mission in life to screw with the entirety of Western civilization.  Purely for altruistic methods or so we're told.  I mean you listen to them and we're all a bunch of Nazis or something.  Manning, much like Assange was PO'd at the United States.  He thought the big bad Army had fucked him when his cross dressing Boyfriend had Dear Bradley'd him.  That he was a massive drama queen before his boyfriend left him probably didn't enter his mind, he wanted to get back at the institution that had screwed up his life.  Should I mention at this point that there is no draft.  That Judges will be removed from the bench if they offer you a "go to war or go to jail" deal?  If the Army really screwed up his life then the only one he could really blame is himself.  But I guess at some point that would be asking too much.

Maybe Manning and Assange had cyber sex, maybe they bonded over their mutual self love who really knows how the ball got rolling.  One thing is for sure before Manning no one had ever heard of Wikileaks.  After it was on the tip of the tongue of every news agency and it was the deep worry of Governments around the world, (except the really bad ones like Iran, Syria, or N. Korea needn't have worried of course because they're all "enlightened").  In an absolutely stunning move, this poster child for stuck on stupid, took blank CD's labeled Lady Gaga, and actually went looking through the CENTCOM's Secure database for a scandal, then after he rejected a few that were apparently too cut and dried, he settled on the one that was sure to give the Army a black eye.  Then while pretending to sing along to the nonexistent songs on the CD copied reams and reams of classified intel.

State acting petulant, I might be able to forgive, if this guy had somehow uncovered a My Lai type incident, I could forgive that too.  But what he uncovered was actually out there for public record if anyone wanted to find it.  Hell I have the PDF on my computer for the 15-6 that both 227 AVN and 2nd Bde 2 ID did.  The story was even broken by Washington Post Author David Finkle, who describes in great detail exactly what happened.  So what was the point of releasing this video?  For that matter he released classified documents that named informants, and methodology of tracking insurgents.  Really this is one of the biggest OPSEC breaches I've ever heard of, and in the information age, he is a real life Benedict Arnold that has given up the fort so to speak.

But Manning's crimes go beyond just a simple OPSEC breach or me being a little but hurt about being forced to relive the worst month of my life.  See names were named.  People who had helped us or at least not turned a blind eye to the good we were doing were mentioned in numerous reports.  Guess what happened to those reports.  Released for anyone and everyone to read.  Want to guess what started happening?  Well a few people grew a head shorter to say the least.  A few who am I kidding, we may never know how many back alley killings were the result of Manning's actions.  One thing is clear any of those informants that had internet connection and knew of this got out of dodge fast.  All of this because he got but hurt.  Get over yourself ass wipe!

If I spent a hundred years searching through a hundred languages I doubt I could find a word to describe the loathing I hod for Manning.  His actions are in keeping with the lowest traditions of the far left loons and kooks.  Never once did he consider the consequences of his actions, or the effect it might have.  Did he bother that many of his fellow soldiers might be put at risk and possibly killed because of this?  Did he even care that the locals we really did want to help would be royally screwed by his actions?  Not in the slightest.  He gloated like a little kid about what he had done.  Gleeful, that he had struck a blow for. . . something.  He is, and will remain in my eyes a traitor, and deserving of a punishment to fit that crime.

For the rest of his life I hope he has to live with "intolerable" discipline.  I hope he has to march everywhere till he's too old to walk.  I hope that he is treated like he's going through day 0 of basic every day for the rest of his natural life.  Perhaps the most fitting punishment, since the prosecutor is too much of a s chicken shit to go for the Death Penalty, would be for Manning to never again be able to escape the system that he so sought to wound.  Anything less would be, in my opinion a miscarriage of justice.

I saw a sign on the Washington Subway, and had to "fix" it. 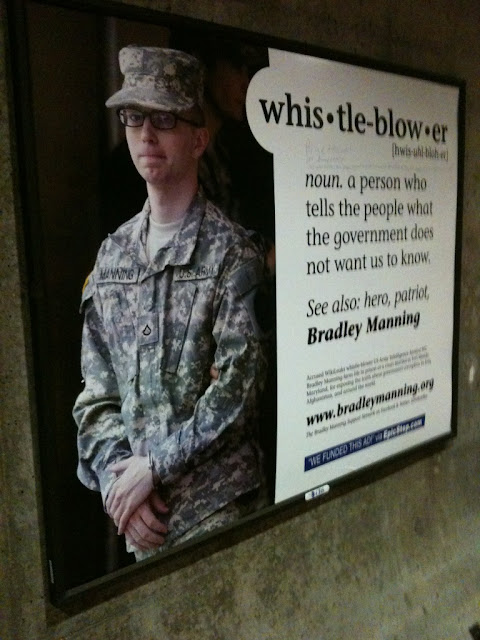 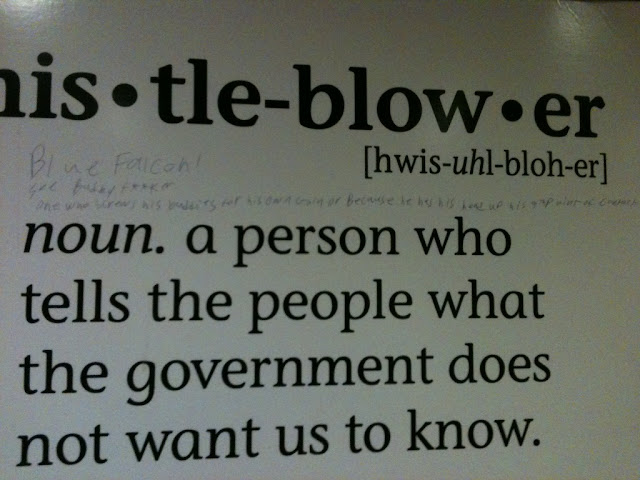 "Blue Falcon!  See Buddy F**ker one who screws his buddies for his own gain or because he has his head up his 4th point of contact"