To preface this post; I got into it with someone over twitter about a piece of anti-war drivle called "I sing of Olaf Glad and Big" now to be clear I think the idiot who wrote it was probably on some form of medication, its pretty poorly written, and sounds like someone was trying to turn it into a song but just got lazy along the way.  I don't really care about the poem, because like I said its very poorly written.  But when I have friends that retweet this, it gets a *little* disturbing, and then to have someone try to troll me which is in essence to shout me down, sounding ever more childish I realized that I simply could not respond properly to his claims in 150 characters or less.  So here is my considered response and really I don't care if you keep up your "I know you are but what am I" BS, because chances are people won't take my words to heart.

It is assumed that it requires intelligence to survive.  The smart people get to go on living right?  Stupid people always find a way to get themselves killed, and no place is this Darwinian theory played out than in War.  Right?  Well. . . actually that's a very narrow and irrational argument.  It is assumed that if you're "smart" you won't obey orders that will get you killed.  Even more so it is "intelligent" or "brave" even to take a look at what your nation is doing at war, and say in a loud and firm voice "I'm not going".  Sure at this point there are probably other words like "immoral" and "illegal" thrown in to give moral justification for the stance taken, but the ens result is the same.  You refuse to go.  Way to stick to your guns.

There's just one problem with this argument, namely that it assumes that intelligent people never go to war.  To be clear War is not something that anyone should undertake lightly, and while it is moral and indeed prudent to ensure that your leaders have done everything possible to ensure that you're fighting a good cause.  However once the war has actually started, any methodology that attempts to subvert overtly or covertly the war effort is wrong.  They even have a word for that.  Treachery.  To be clear I am talking about American wars.  I can argue quite vociferously that the Soviet Union should have had quite a few traitors, because it was a system not worth the loyalty it would pretend to have in propaganda.

But is it mindless to obey orders that you know will get you killed?  Orders that seem futile?  I can think of no greater example of futile orders that caused a leader a great moral struggle than on the morning of June 3rd 1863.  For two days the North and the South had been locked in truly brutal combat.  On the first day the North lost, rather badly, but managed to retain the high ground.  On the second day, thanks in no small part to General Dan Sickles completely boneheaded move forward into the wheat field (which nearly doomed his men, and was the sight of some of the most brutal fighting) the South nearly won the day.  There were several night skirmishes that again the South won, and had they been able to exploit it, might have given them victory.  On the third day Lee was sure the Union center would break.  All the rest of his divisions had been engaged and were suffering heavy losses, except one.  General Pickett's.  General James Longstreet tried desperately to get General Lee to reconsider the attack.  In the end, however he could not dissuade Lee.  Pickett who was eager to get into the fight asked Longstreet if he could attack.  Longstreet with a pained expression could not speak, only nod.  What followed is one of the most heartbreaking displays of American bravery, and courage under fire in our entire history.  Pickett's division was cut to pieces, over a mile of open ground all the while filling in the ranks.  They breached no further then ten meters at only one point in the Union line.

Now was this mindless?  Most people would shrink in sheer terror at even the notion of being asked to make such a charge.  I have been to combat, and if I were ordered to make such a charge I might certainly lose my lunch, but make it I would.  There are other examples of such actions.  VT-8 attacking the Japanese fleet without fighter protection, flying the slow underpowered Dauntless Devastator torpedo bombers.  Of the15 flyers that made the assault, only one released his torpedo, and only one man survived.  That day, VT-6 and VT-3 also assaulted the carrier shortly afterwards.  Only 6 Devastators returned to their carriers.  Not a single one of the 45 planes scored a hit.  I could also speak of the Marines at Peleliu charging across the airfield with jack squat for cover.  Such bravery has a terrible cost, and sadly the anti-war crowd is often far to quick to condemn bravery in the face of enemy fire for the idea that it is braver not to fight at all.

It is difficult to defend morally ambiguous wars.  Indeed, deciding which side has the moral high ground is something that historians always hotly debate.  We point to WWII and the Civil War as wars we had the moral high ground.  The North freed the Slaves, and yet they invaded and terrorized the South, which in any other conflict would be seen as the "good" guys because they were simply defending their homes.  The Confederacy had the first Draft in American history, and the North's vast conscript army would torch and loot every town the occupied.  So who had the moral high ground here?  Both sides truly believed they were in the right.  So who was right and who was wrong?

It might seem that I have just shot holes through my argument.  But in truth, it takes a very intelligent individual to fight in a war.  You must always use your head and your wits.  Your baser instinct is almost always to run, not just run but run as fast as you can in the opposite direction.  It takes an incredible act of will, to keep going, even to counteract the enemy's movements.  To keep looking around when you hear that very familiar snap-hiss of a bullet coming oh so close to hitting you.  Even if you don't run, it takes an incredible amount of composure not to shoot at anything and everything that moves.  The methodical act of quickly moving to cover, and then making sure to fire a well aimed shot versus "spray and pray" takes more than just courage.  American soldiers never "mindlessly" follow orders, they usually know full well the consequences of the orders given, and good commanders know to keep their orders flexible enough to allow junior leaders room to maneuver, and implement them to the best of their ability.  Believe it or not some of our highest awards for valor often go to men who disobey orders, in order to save comrades or because they see some objective that their commanders are not aware of.

Today's Army is all volunteer.  I might buy it if there was still a draft on that perhaps some people ended up in the Army that just should not go to war.  That argument is completely invalid now.  It doesn't matter if you trained to fight the Evil Empire and never got the chance, you go where you are sent.  Soldiers can not and really should not be allowed to choose the conflicts they take part in, if that were the case we would have a military dictatorship no better than Myanmar or Cuba.  Indeed civilian control is a good thing.  They have not always been wise or even deserving of the loyalty the Army has shown, but it is far better than the alternative.  Again here, do not confuse selfless service with mindless obedience.  In private we will express our opinions, strongly even, but in public, we do our duty because it really is the right thing to do.

Lastly I want to talk to the idea of opposing immoral wars.  To be absolutely clear though I do not want to get into an ethical debate, there really were some good reasons to get involved in both Korea and Vietnam.  The "boat people" provide more than enough proof that the "People's Republic" of Vietnam was just as cruel as the Japanese and French that occupied them decades before.  Did American generals lose their way?  You bet they did.  You can thank the political appointees for that.  I personally have nothing but the deepest loathing for McNamara and Johnson.  Again, the troops really did try to do the right thing, but the emphasis on body count and "political" victories made a lot of their sacrifices painfully empty.

to those that have, and will continue to call soldiers mindless, I can only say this: I don't care what you think. That somehow you think you are my intellectual superior because you "knew" enough to stay out of conflicts.  That notion is to me very laughable indeed.  How can you possibly judge me unless you've done a tactical ruck march in my boots?  Would you understand the purpose of things like "Operation Ranger Dominance" and the very real impact it had?  There may indeed be times that I as a ground soldier do not have the larger view, but my view is sufficient to know that Iraq was worth fighting for.  You will scoff at me, mock me, and attempt to belittle my service.  I can only laugh at the *ahem* mindlessness the intellectual cowardice of the anti-war crowd. 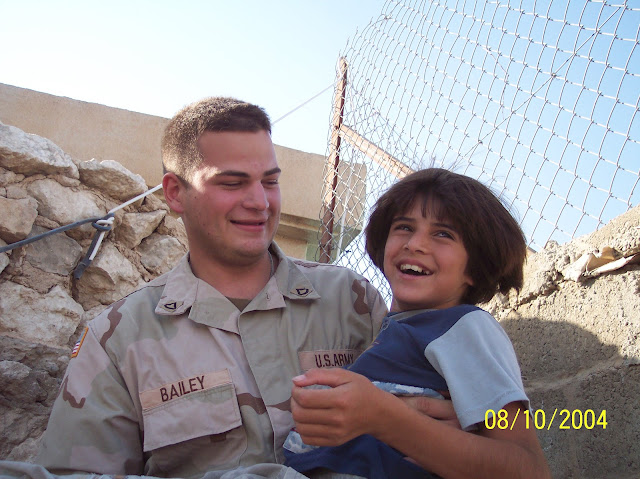 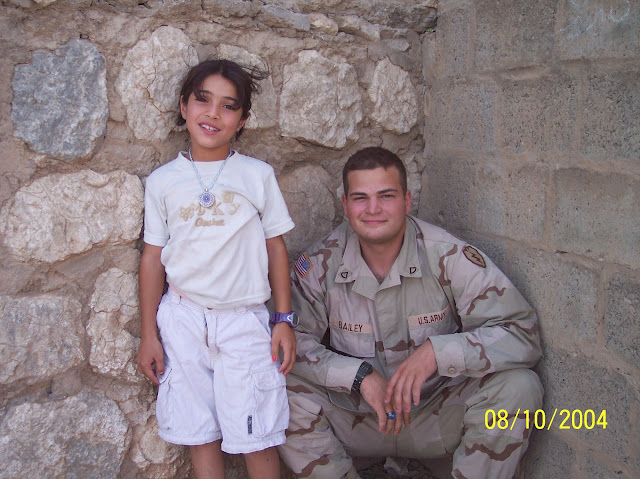 Obvouslly I am one mean evil MoFo.  Man you can see all the torture I've done on them. . .  The one on the top is Zarah the one on the bottom is Hannan.  Their town was ringed by landmines Sadam emplaced to kill wayward Kurds.  The mines were removed at great expense by America.  Hannan is now married and has a child with another on the way.  If you do not thing they are not worth fighting for then I am not sure what is.
Posted by The Mad Medic at 19:07