Veteran Suicides Are Not a New Problem 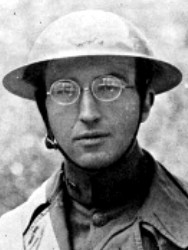 If I said the name Major Charles Whittlesey, what would you think of?  Would you think of a Citizen Soldier?  Would you think of a man who believed the war was wrong for America, but went anyway?  Or would you simply give me a blank look and say "who?"  Unfortunately most of the people out there wouldn't know anything about who he was, what he did, or why his story is still relevant.  If I showed his picture you'd think he was a poindexter who was probably a clerk or typist or something.  Nothing really heroic, or tragic there.  You'd be dead wrong on both counts.

Major Whittlesey lead the "Lost Battalion" into the Argonne forest, he was ordered to continue his attack despite the fact that whole divisions on his flanks had been beaten back.  He was quickly encircled and badly out numbered he and his small battalion fought bravely and gallantly to hold off the enemy for over 5 days, losing over half his unit in the process.  For his actions he was awarded the Medal of Honor, and was one of the pall barres for the Tomb of the Unknowns soldier from WWI.

His visage would not make one think of a warrior, nor would it make you think of uncommon valor or sacrifice, but he was a standard barer for the time.  On par with Sgt. Alvin York, he was a celebrity for the roaring 20's.  But this celebrity wore on him.  He only lasted a few years after the war.  Although it is not known exactly how he died, what is known that on the 26th of November 1921 he disappeared off the SS Toloa.  There were several notes left with precise instructions so it is fair to assume that he threw himself overboard.

But sadly he is not alone.  Many of that generation felt "lost".  Because there were no statistics kept, we may never know just how many died because the trauma of the war was too much.  It didn't help that the methodology at the time to treat "shell shock" (some of which might have actually been TBI) was to hook them up to a system and just keep giving electro shocks until they were fixed.  This sadly had the opposite effect, despite the many quack doctors assurances. 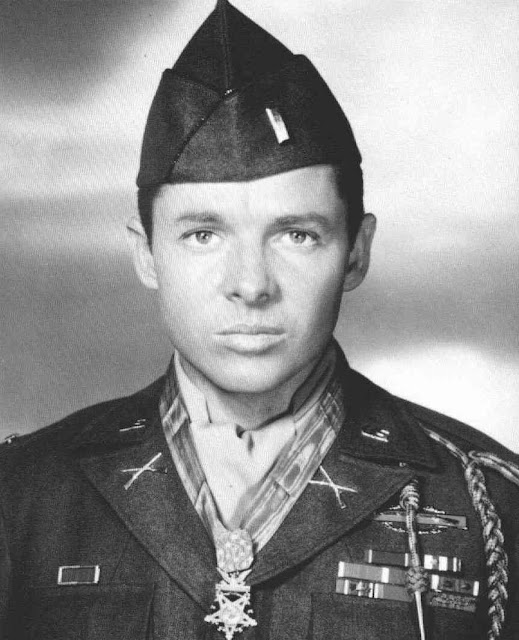 I like this picture of Audie Murphy the most.  Its one of the few you can really see his eyes.  I have said before that if ever we need to look to a Hero, this is the man.  Every award for Valor in WWII, a battlefield commission, and nearly got into West Point.  This is a man that should have found a long and very prosperous career in the Army.  Unfortunately an infection after the action that earned him the Medal of Honor ended all that.  He made his way to Hollywood, and was living out of a suitcase, when he caught a "break" of sorts.

He played in many many westerns, and even played himself in a movie based on his memoirs.  But his struggles with Hollywood, and his nearly constant battles with depression guilt and anger are probably the better story.  The more heroic.  He had locked himself in a hotel room, to come down off of medications he was addicted to, and actually had an apartment of sorts in his garage where he could go to be alone when the memories got too bad.  Audie Murphy had a hard life, and he had nearly committed suicide a number of times.  That he didn't is probably more a testament to his own willpower than to any one factor we can easily replicate.

In 1996 the Chief of Naval Operations, the head Admiral of the Navy killed himself over a series of Medals, he apparently claimed he had more than he did.  There wasn't much follow up to this incident, but it was found out moths later that he was actually authorized everything he showed on his uniform, which made his suicide a little more baffling.  If the head guy in the Navy could kill himself, over a clerical error, what is to stop Private Joe Snuffy after a really hard deployment?

The Answer is that there were always suicides in the military.  Going back as far as history is recorded.  Men would often kill themselves rather than accept a loss or defeat.  Once after the Civil War, veterans would intentionally be addicted to morphine or heroin to "cure" alcoholism.  The morphine addiction was considered a more "?socially acceptable" addiction, as they weren't likely to tare up every bar in sight, beat their families black and blue, and generally cause a ruckus.  Did it matter that this would only subject them to their own personal hell that would inevitably lead to either death by suicide or over dose?

The "12 veterans a day" number is frightening.  There's only a few million Iraq or Afghanistan veterans in America.  so if that number is true, then we might disappear faster than any previous generation of veterans before us.  Unfortunately at some point there will come a time where that will stop.  All the ones that can be helped will have been helped, and the ones that can't. . . we can only pray they found Peace.  The problem is not new.  It is very old.  Perhaps, however, with new techniques, we may find a way to reduce this problem as much as humanly possible.  I know I owe it to my Battle Buddies, and to all the Soldiers Sailors Airmen and Marines that came before, and will follow me.
Posted by The Mad Medic at 19:30