Anyone that knows me, and knows some of my struggles over the past few years will know the Name Ethan McCord.  Once a battle buddy and a friend when I tried to warn him off of the bunch of Uber retards and liars that are IVAW and WCW (not the Wrestlers) he took my real honest concern for his well being and went to all his buddies to laugh about it.  Needless to say I was beyond pissed.  I do not think there are words for how furious that made me.  Now before someone gets on here and takes what I said, and he uses it for more publicity to talk about how "brave" he is, no I didn't want to kill him.  Maybe kick his ass, to include: choke slam, cock punch, headbutt to Ovaries, Purple Nurple, well really the list goes on.  But not kill him.  I'll let the vaguries of fate take care of that.  BUT if he were to get hit by a bus, the run over by a steam roller, then marched over by a marching band. . . I might in a very unChristian moment laugh my ass off at the Poetic justice.

To say that I might have issues with him going around to middle schools and try to tell the kids there about the horrors of war is a bit of an understatement.  Seriously to freaking KIDS who won't know they're either being lied to or that the "facts" or "statistics" are not even close to the truth.  Here's him promoting this band or re-re's

Now I'm not going to get into that.  John Lilya over at This Ain't Hell, has ripped them a new one a few times.  Matthis Chirouix who is a patten liar and fraud is perhaps one of the most recognizable people who champion this group.  I tried to warn McCord not to be lumped in with them.

IVAW and many of the Anti-War crowd go full retard almost out of hand.  They may start off saying "you know I really don't think we're gaining anything from being there" which I can respect.  Give them a few years (or weeks) and they're burning flags, crying about massacres that didn't happen, and a number of other just plain retarded displays.  Code Pink probably deserves a mention here, but really if I talk about them I'll either die of laughing, or try to break my key board.  Really their dopiness knows no bounds.

But then comes this. 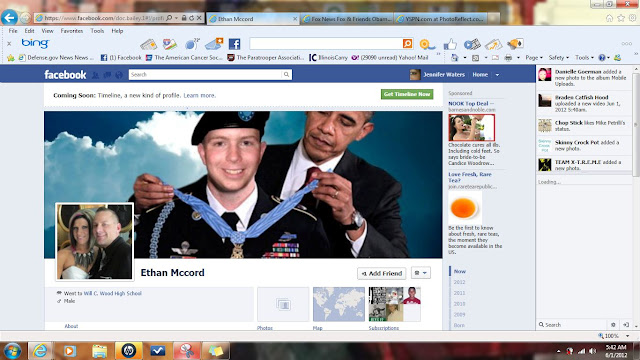 I'm not even sure where to begin at the level of retardation at this picture.  Pohotshoping a piss ant Traitor's face onto SFC Petry as he received the Medal of Honor, is beyond disrespectful it is just plain stupefying.  The Nation's highest award for courage "given" to a whiny mopey kid who put nearly all soldiers in the CENTCOM AO in danger, and potentially set back our efforts by months or years. . . That's not to mention all the informants that were named by name. . . Are you S***TING ME?!?!?!  People have literally died because of Manning's actions.  Not because of direct action, not because he was being attacked, but because he was pissed off that his boyfriend left him.  What lives has he saved?  Even though the War has gone one, his leaks haven't made anything better if anything his leaks have made things worse.  It did not showing us anything we didn't already know.  So why is this "heroic"?  More than that, this photo shows a complete lack of respect for real life heroes.

I don't know when McCord got his head stuck up his 4th point of contact, I don't know who turned him on to this circle jerk crowd, but one thing is clear, he has turned his back on every man or woman that has ever worn the uniform.  If he has any shred of decency left he would have deleted that picture and said "you know guys that's a bit disrespectful" when someone sent it to him.  But no, he displayed it as prominently as he possibly could.  Obviously he doth drank the Kool-Aid and he likey the taste.  I gotta tell you, Blue Falcon that you are, you should know, never go full retard.

The Photoshop on his FB page is beyond disgusting. Tells someone all they really need to know about McCord.

Idiot. He's anathema to anyone with an ounce of sense.

Back in the 1770s the split was 1/3 Rebels, 1/3 don’t care, and 1/3 Loyalists. You guys are Loyalists, that’s all. You support the fascist state and corporate socialism and the New World Order – that’s the choice you’ve made. “If you love wealth greater than liberty, the tranquility of servitude greater than the animating contest for freedom, go home from us in peace. We seek not your counsel, nor your arms. Crouch down and lick the hand that feeds you; May your chains set lightly upon you, and may posterity forget that you were our countrymen.” S. Adams

Methinks you doth drank the Kook-aid. Annon it's kinda sad you saying that and not having the Cajones to use a name or a tag. So here's my response:

Pull your head out of your ass. There is no "revolution" going on now, and I would not have been a loyalist had I lived then. The NWO crap is proof positive that you're either a retard or a nut.

hello toy soldiers, why don't you stick the barrel of your gun up your own arseholes, sit tight on it and then press the trigger? Oh sorry, I shouldn't ask, I should order! Considering that you guys only takes orders... take mine then, bunch of full retards!

as a fellow B company guy its so true doc...so true and he loves children but wont take care of his own.

In my opinion, i just think that you are a jealous whiney baby. You're just mad that it wasn't you !!! Quit being a pussy !!!

The guy who wrote this post is a f k n brainwahsed pussy that should kill himself and do the rest of us a favour.

You don't deserve this planet a hole.

My Gawd, I have never read such unAmerican comments in my life...at least not since the 1960's! What is wrong with you people? There are no greater heroes in this country today than our American soldiers and if they weren't doing their job of defending your sleazy asses you wouldn't even be able to come on line & spout your hateful attitudes. Obviously none of you ever served a day in your lousy lives. I'm from the Vietnam era & I can tell you today...nobody gives a crap about those who protested that war. Get a life & stop supporting 'glory-seekers" & cowards.

The real travesty here is the fact that you are using internet explorer. lol

I'm going to ignore all the grievous generalizations and the personal attacks ad hominem to simply point this out. Until you actually write/post something thought provoking with support for your opinions I cannot take someone like you seriously in your arguments.